While the global launch of Diablo Immortal is taking place on June 2, the game will launch in the rest of Asia Pacific 20 days later on June 22.

Greetings, travelers! The Worldstone is shattered, and now it falls on the heroes of Sanctuary to fend off the terrors rising in its wake. We are glad to announce that following Diablo Immortal’s global launch on June 2, beginning on June 22 PT, brave adventurers from the rest of Asia Pacific can take up arms against the demonic forces of Skarn, Lord of Damnation. An untold chapter in the Diablo storyline taking place between the events of Diablo II and Diablo III and a sinister plan to uncover awaits.

Diablo Immortal, our first MMOARPG (Massively Multiplayer Online Action Role-Playing Game) and free-to-play Diablo game, will become available on Windows PC, Android, and iOS in the rest of Asia Pacific regions (including Hong Kong, Indonesia, Macao, Malaysia, The Philippines, Singapore, Taiwan, and Thailand); the game will also be available in Vietnam on PC only. These regions will receive dedicated game servers to bring players better connectivity and ping—all the better to relish the AAA demon-slaying experience players know and love.

Players who have pre-registered across all platforms will receive the stunning Horadrim Cosmetic Set when the game launches.*

*Players must log in to Diablo Immortal and complete the game’s tutorial within 30 days after release to claim the Horadrim Cosmetic Set. Offer can only be claimed for one character per account.

Q: What are the system requirements for Diablo Immortal on iOS, Android and PC? 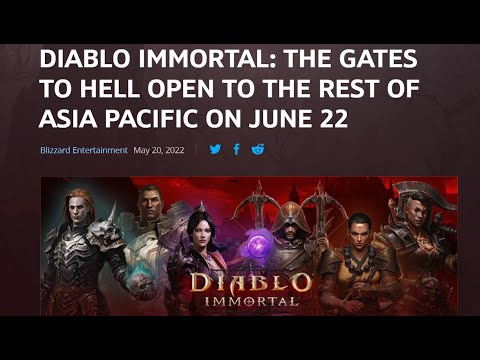 Q: If I decide to create a character in another server on June 2 and start to play, will I be able to later transfer my character to my regions’ server after it goes live?

A: No, the character created on the specific server will not be able to transfer to another. If players wish to create a character and play on servers that go live on June 22, you will need to create a new character instead.